One boat drifts off 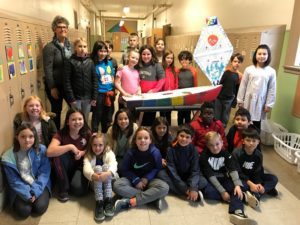 the coast of Baja, Mexico, while its creators hope it catches waves headed west. Another group of builders await their boat’s return from the coast of Japan. These are the young mariners of Jaina Kapranos’ fourth-grade class at Richmond Elementary School. With the help of the Columbia River Maritime Museum in Astoria, the Richmond students’ boats have set sail across the Pacific Ocean.

“It’s kind of a cultural exchange,” Richmond fourth-grader Augie Wolfe-Rocca said. “I hope our boat is going to make its way back here. I had a great time on this project.”

Kapranos’ class built two 5½- foot-long fiberglass boats equipped with GPS transmitters. One boat was launched from a freighter ship off the coast of Baja last month with the hope that it will find its way to Japan. The other was flown to Japan, where students from Kanehama Elementary School will help guide its launch this week.

“The work was real,” Kapranos said. “The kids were responsible for it all. The teachers were just facilitators.”

In the process of working on this project, the students learned a wide range of subjects, including oceanography, international relations, geography, ecology, and most importantly, the importance of communication and cultural awareness, Kapranos said. They also learned some basic construction skills.

“The hardest part was sanding the boat because painting was really simple,” said Sophie Durocher, a fourth-grader in Kapranos’ class. “The sanding probably took the shortest amount of time, but we had to work really hard.”

While building the boats, Kapranos’ students wrote letters introducing themselves to pen pals in the Japanese class. The Richmond students and Kanehama students will continue to exchange letters throughout the school year. Both classes are tracking the boats’ movements online.

“The mini-boat project is an experience these fourth-graders will remember their whole lives,” said Jennifer, PPS Science Teacher on Special Assignment. “It’s unique in that it is a project in which content is seamlessly integrated, and because Richmond is a Japanese dual language immersion school, it is a perfect fit.”

A third group of student mariners from Astor Elementary School launched a boat off the coast of Oregon earlier this year. It sank off the coast of the Tribal Islands near Victoria, British Columbia.

To track the boats and learn more about the program, see the Columbia River Maritime Museum website.

Welcome to our website. You can edit this sidebar in Customize > Widgets